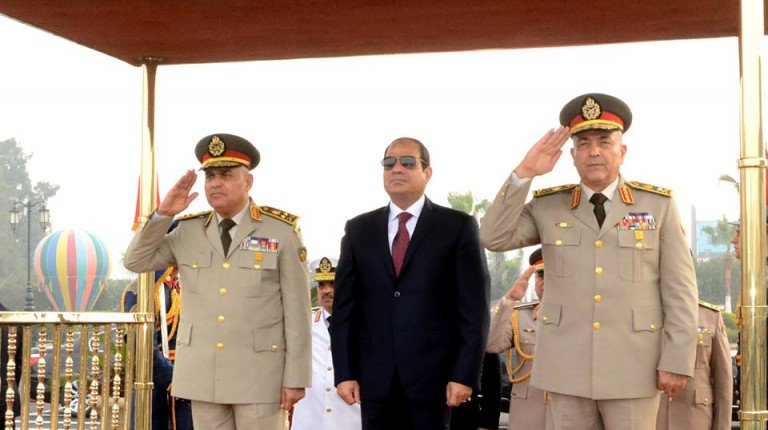 On September 12, during a visit to Seoul, South Korea, Egypt’s Defense Minister reportedly announced that Egypt would be severing military ties with the Democratic People’s Republic of North Korea. The alleged announcement and subsequent speculation, which was not immediately confirmed by the Egyptian government, comes as the United States and other members of the international community have repeatedly called on the Egyptian government to cut ties with the isolated hermit state.

The official South Korean news agency, Yonhap, reported that Egypt had already cut ties with the DPRK according to the Egyptian Defense Minister Sedki Sobhi. Confusion over the validity of the remarks arose when Egypt’s government neither confirmed nor denied the report. According to Yonhap, Sobhi reportedly said, “Egypt will actively cooperate with South Korea against North Korea acts that threaten peace.”

When reached for comment, the Egyptian Army’s official spokesperson, Tamer El Refeai, told Egypt Independent that all the details pertaining to Sobhi’s visit to South Korea were listed on the spokesperson’s official Facebook page. However, the Facebook statement did not include any information on the state of ties between Egypt and North Korea. Several Egyptian news outlets included Sobhi’s comments in their write-ups about the trip, only to remove them later. The daily newspaper, El-Masry El-Youm, initially published his comments in its print edition, but removed them in later iterations.

The lack of clarity surrounding the veracity of the comments creates further pressure for the Egyptian government, which has faced increasing demands by one of its main allies and sources of foreign aid, the United States, to scale back its economic ties to North Korea. On August 22, the Trump administration announced its intention to cut $96 million in aid and delay $195 million in military funding to Egypt, citing concerns over Egypt’s human rights record. However, other reports have speculated that the move was part of a broader administration strategy to pressure Egypt into severing ties with the DPRK, further isolating the state from one of its key trading partners.

When asked about the decision, a State Department official reportedly said that issues of concern were raised with Cairo, but refused to verify whether Egypt’s relationship with North Korea had factored into the decision.

Egypt has long maintained a relationship with the isolated regime in Pyongyang, especially in the arms trade. Egyptian policymakers have viewed North Korea as a key source of military technology since the 1970s when, following North Korea’s support for Egypt in the Yom Kippur War, then-President Anwar Al Sadat agreed to sell Soviet-produced Scud-B missiles to North Korea from 1976-1981. The DPRK returned the favor by supplying technological assistance to Egypt’s missile production.

Despite changes in successive governments, Egypt has sustained the arms trade with North Korea. As recently as 2015, the United Nations issued a report confirming that the North Korean Ocean Maritime Management Company (OMM) was a central player in arranging the illicit shipment of concealed arms via individuals and entities based in Egypt, as well as other countries. The report stated that OMM representatives were stationed with a company called the Sunlight Agency in Port Said until at least 2011. In February 2017, UN investigators stated they had uncovered evidence of North Korean trade in “hitherto unreported items such as encrypted military communications, man-portable air defense systems, air defense systems and satellite-guided missiles” in the Middle East and Africa, among other regions. Investigators added that in August 2016, Egypt intercepted a North Korean vessel laden with thirty thousand PG-7 rocket-propelled grenades hidden in wooden crates.

In addition to its ongoing military ties, Egypt has maintained a strong economic relationship with the DPRK, as demonstrated by the approximately twenty economic, security, media, technology and cultural agreements established and ongoing with the regime. In 2008, Egyptian telecommunications firm Orascom helped set up the DPRK’s first and only 3G mobile phone network, a deal which Orascom’s billionaire business tycoon Naguib Sawiris oversaw. While critics have questioned whether the arrangement violated UN sanctions and embargos, Sawiris maintains that he has obeyed all UN resolutions and is not in violation of sanctions. The deal reportedly supplied Orascom with 300,000 new North Korean customers and spurred further Egyptian investments in North Korea’s economy. The Egyptian State Information Service, the government’s official channel, states “the volume of the Egyptian Orascom Group’s direct investments in the Democratic People’s Republic of Korea has exceeded half a billion dollars, which puts Egyptian investments at the top of the pyramid of foreign investments in Korea.” For its part, North Korea exports various goods to Egypt including cars, plastics, and rubbers among others.

Cairo has also maintained close diplomatic times with the DPRK, one of three Arab countries (including Syria and Palestine) that operates an embassy in Pyongyang. In addition, Egypt is “one of only five Arab countries to host a North Korean Embassy on its territory, the other countries being Syria, Algeria, Kuwait and Libya.” In 2015, President Abdel Fattah al-Sisi invited North Korean leader Kim Jong Un to attend the grand opening of the re-designed Suez Canal, who dispatched the president of the Presidium of the Supreme People’s Assembly of North Korea, Kim Yong-nam to attend in his absence.

While Egypt’s government has condemned several of the North Korean regime’s recent nuclear tests, in a 2016 television interview, a military spokesman attributed the condemnations to Egypt’s role on the UN Security Council and the need to take a principled stance against the proliferation of nuclear weapons. When questioned about continued US demands for Egypt to shutter its ties with the DPRK, Egyptian Foreign Ministry spokesman Ahmed Abu Zeid told Al-Monitor, “Egypt is managing its relations with foreign countries based on its own interests and priorities without taking into account any pressures that may hinder the independence of its national decision.” Yet recently, the United Nations Security Council unanimously passed Resolution 2371 with a “yes” vote from Egypt, a signal that Egypt supports much tougher sanctions against North Korea despite the two countries’ long-standing economic and military ties.

At the same time, Defense Minister Sobhi’s recent trip to South Korea was meant to show Egypt’s commitment to South Korea, with the aim of boosting military ties between the two countries. With no confirmation as of yet regarding a possible severing of relations with the DPRK, Egypt may be attempting to have its cake and eat it too; however, the recent decision by the Trump Administration to withhold and delay critical aid may be more than Egypt’s fragile economy can endure. Given its relatively weak bargaining power and its substantial and longstanding dependence on its alliance with the US, Egypt may soon succumb to US pressure by officially confirming the severing of ties with North Korea. While the stakes of cutting these ties remain high, the risk of losing a stable and secure partnership with its closest western ally may just be enough to prod Egypt’s reluctance.

International Relations and CooperationSecurity Forces
All
2017-09-18
asaeid
Previous Al-Azhar and the Battle of Ideas against Extremist Islamism
Next Sisi meets Abbas, Netanyahu to resume peace process in the Middle East