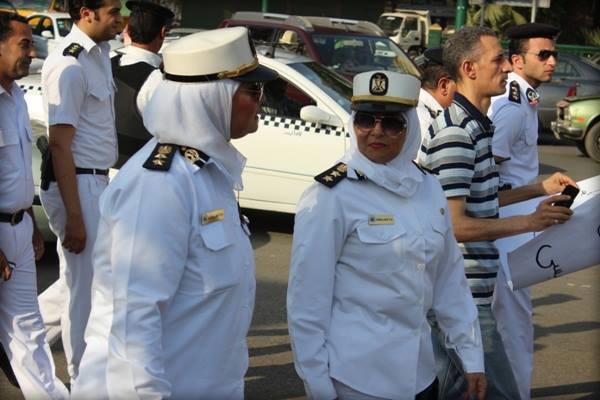 ‘Women in Egypt’s Army’: A Demand Aiming for Equality Usually Met With Sexism

Campaigns calling for military service to be available for Egyptian females are in constant growth each year. In Egypt’s Fourth National Youth Conference, held in Alexandria in July, the calls were renewed on Egypt’s minister of defense Sedky Sobhy.

Gehad Al-Komy, founder of “Female Egyptian Conscript” delivered her demand to Sobhy to allow voluntary military service for females. She further called for opening training centers for females in order to allow for their participation in martial arts. Sobhy, in return, promised to take the demand with seriousness and stand on the legal and constitutional aspects of it.

Howbeit, these demands are constantly met with sarcasm, not from the authorities, but rather from people who depict women as fragile objects who cannot withstand the burdensome of military service and believe that women will be physically challenged in such environment.

While these campaigns are initiated by females who have a true feeling of patriotic sentiment, sexism often chases these women.

A strong sarcasm wave hit social media a few months ago when the Ministry of Social Solidarity released a vague decision that was ultimately comprehended as a compulsory military service for females. The rumor sparked sexist comments such as “girls will fight if they are wearing the same outfits in the military” and “girls won’t be able to perform their tasks because of their delicate temper”.

Comments have presented a dominant idea that represents women as helpless and inefficient creatures. However, there is not a single proof of these claims as Egypt never had an actual trial of females in military services.

Multiple Egyptian films have depicted women who join security apparatuses as individuals who should rely more on their femininity rather than their brains and intellect.

By the 1990s, prominent actor Nadia Al-Guindy had a major bulk of her films involved in the military work and espionage. However, her roles objectified her and principally depended on her seducing others to either distract others from her secretive mission or to tempt them for more information.

Her film, “A Mission in Tel Aviv”, whose author confirmed that it was not written based on a true story, tackled the conflict between Egypt and Israel while they were in a state of war. Al-Guindy played the role of a double agent after she had confessed to the Egyptian authorities that she worked in favor of Israel. The plot of the film progressed so Al-Guindy started her mission as a spy.

Even though the idea is considered patriotic and the character’s motives were purely depicted as loyal, the plot persisted that Al-Guindy relies on her feminity, despite the intense training she received from the Egyptian authorities. The mission of a spy is undeniably delicate. However, the constant light that was shed on her womanly attitude was a clear form of exaggeration.

“A Mission in Tel Aviv” was released in the 1990s. Nonetheless, the sexist view continued to 2016 when Egyptian actress Yasmine Abdel Aziz released her film “With a Moustache”. The film features a number of women who work in the police apparatus, which is, at first, seen as a good step to include women in similar roles. Given that in Egypt the role of women is rather limited in the security apparatuses, their representation in these films may be viewed something “progressive”. However, “With a Moustache” showed them as naive and foolish, also some of them took fruits and vegetables to peel and prepare food at the workplace, in a strong sign that women belong in the kitchen.

In the vast majority of action films, women are either too depended on men, count on their male counterparts to get the mission done or depict them as reckless, imprudent elements.

Despite the presence of females in multiple armies, it is exclusive to Egypt to belittle their skills and view them as incapable of excelling within an arduous environment.