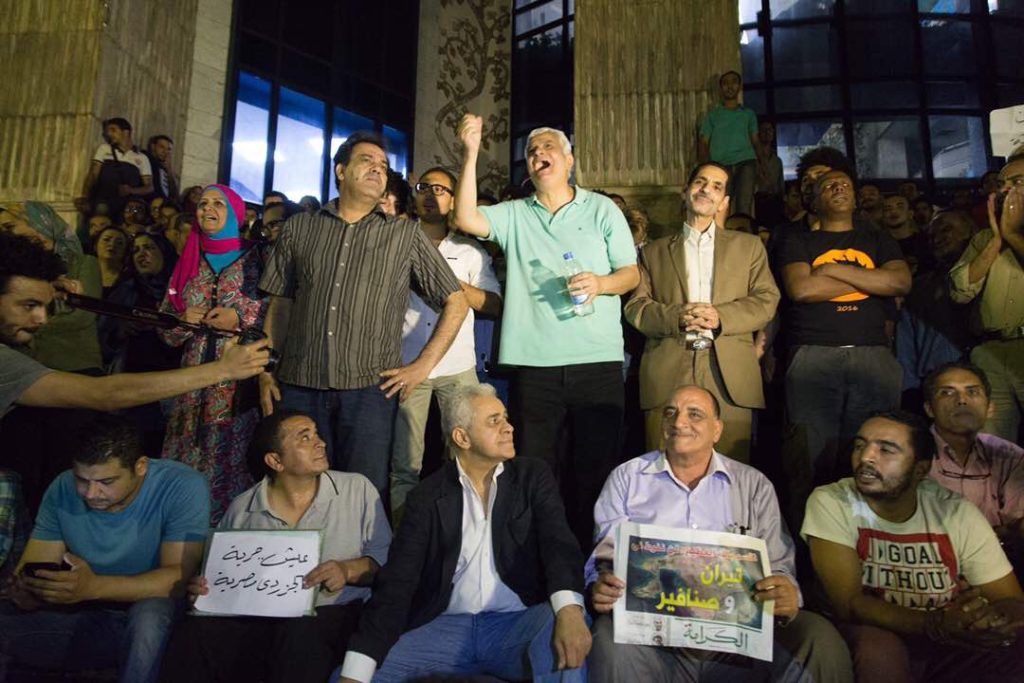 Hundreds of members of professional syndicates have signed statements in opposition to Parliament’s approval of the Tiran and Sanafir agreement, brokered by Egypt and Saudi Arabia in April 2016.

Eight hundred and fifty journalists issued a statement on Sunday announcing that they reject the agreement, which concedes sovereignty over the two Red Sea islands to Saudi Arabia, describing it as invalid and “demanding that state institutions respect the Constitution and the law, and the blood of martyrs who defended Egyptian land.”

The Journalists Syndicate announced that it would launch an investigation into the sit-in held in its headquarters on Wednesday protesting the agreement. Hatem Zakareya, a member of the syndicate’s board, told Mada Masr that no request was submitted before the protest, in violation of the syndicate’s bylaws. He added that investigations will also be launched into footage aired on Al Jazeera and other pro-Muslim Brotherhood channels from inside the building and its entrance showing non-syndicate members attending the protest.

Gamal Abdel Rehim, one of four syndicate board members who signed a statement rejecting the agreement, told Mada Masr that allegations that Muslim Brotherhood-affiliated channels entered the syndicate are untrue, arguing that it is not necessary to submit a request before initiating sit-ins at the syndicate.

“Never in the history of the syndicate has any group submitted a request to start a  sit-in,” he said, adding that it is common for non-syndicate members to join political action taking place within the syndicate.

A statement was also signed by 620 members of the Engineers Syndicate’s general assembly denouncing the deal, labeling it unconstitutional. The statement criticized “attempts to pressure opposition and the blocking of websites that attempt to reveal the truth of the matter.”

The statement mirrors that issued by the Journalists Syndicate, calling on citizens to exercise their constitutional right to express their opinions peacefully “in defense of the blood of the martyrs who died to defend the unity of Egyptian land.”

Head of the Engineers Syndicate Tarek al-Nabarawy said last Friday that in his personal opinion the islands are Egyptian, adding that the syndicate should not be involved in politics.

Akram Ismail, member of the Engineers Syndicate and the Bread and Freedom Party told Mada Masr: “Major national causes cannot be separated from syndicate work,” adding that syndicates, parties and social media are the only remaining platforms for political action following the crackdown on the street movement and blocking of websites.

Ismail said that the fact that three leading figures in the syndicate expressed their opposition to the agreement on their personal Facebook pages indicates the syndicate’s position, even if no official statement was made.

Members of the Cinema Syndicate also released a statement inviting people to protest the transfer of the islands “using all peaceful and legal means.”

They called for a protest in front of their headquarters on Saturday to oppose the agreement, but were not able to hold the protest on the street due to heavy security presence. Instead they read the statement to the syndicate members and media present inside the headquarters.

Six members of the Doctors Syndicate board also announced their opposition to the agreement in a statement. However Mona Mina, the syndicate’s secretary general, wrote on her Facebook page: “As a vocational institution, the syndicate has nothing to do with this important political and national cause.”

Members of the Lawyers Syndicate also held a protest inside syndicate headquarters on Tuesday to express their objection.

Since discussions of the maritime border agreement reached Parliament, security forces have carried out an extensive arrest campaign across several governorates, targeting activists and protesters opposing the deal.

Civil Society and OversightInternational Relations and CooperationLegislation
All
2017-06-19
asaeid
Previous Egypt removes mention of 2011 uprising from school curriculum
Next UAE, Egypt agree to cooperate in the fight against terror financing