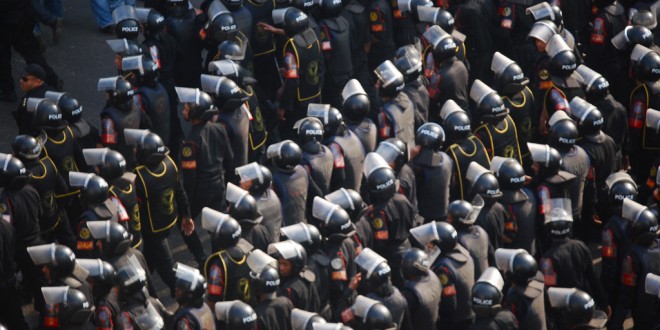 The Interior Ministry may be planning to replace the nation’s lowest-ranking police force with a new type of policeman to be recruited from scratch and offered training in line with modern policing values.

The move follows sustained criticism of violence and human rights violations by police of various ranks over recent months, but particularly those from the least educated section of the force.

The new force being considered is one whose creation was authorized by presidential decree in 2014, according to independent daily Youm7.

The Interior Ministry is accepting applications for the new “police assistant” grade, which was introduced in amendments to the 1971 police law, passed by President Abdel Fattah al-Sisi.

The ministry said these “assistants” could gradually replace the lowest grade of policemen, who achieve the least training and are often accused of acts of violence against members of the public, including several murders and assults on doctors.

Applicants for the new police assistant force must be aged between 19 and 23, holding preparatory school certificates, and will undergo 18 months of training through “state-of-the-art policing programs” before appointment, according to the newspaper.

The new personnel will undergo constant training on human rights issues as they relate to police work, said the newspaper.

The issue of police violence against citizens came to a head in February when a policeman shot and killed a driver durding a dispute in the Darb al-Ahmar neighborhood of Cairo. The incident resulted in angry protests and demands for action to rein in a police force that many viewed as running amuck.

The amendments were referred to parliament for review earlier this week, and they are likely to be voted upon in the next two weeks.

The Cairo shooting incident roughly coincided with another incident in which two police officers assaulted two doctors at a hospital in Matareya, after the doctors refused to falsify medical records. The doctors were beaten and arrested, later complaining of their mistreatment and sparking an ongoing standoff between the Doctors’ Syndicate and the Interior Ministry.

In recent weeks, doctors have staged strikes and a number of protests condemning the incident in Matareya and several similar incidents.