Home / Featured Articles / Why is Sisi afraid of the Constitution and parliament? 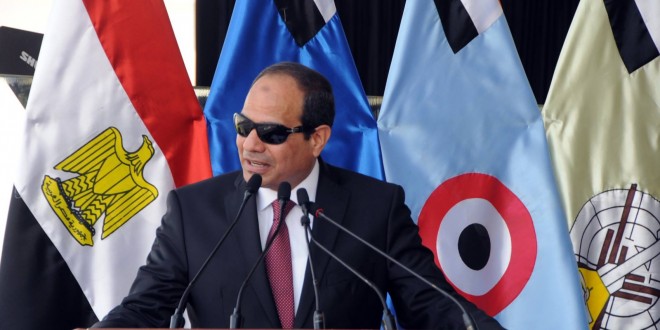 Why is Sisi afraid of the Constitution and parliament?

These statements — which were omitted when Sisi’s address was broadcast on state television — raise questions around a potential call for amending the Constitution to limit the powers of parliament, especially in light of the Cabinet’s resignation in the lead up to elections.

The new parliament will share power with the president to form a new government.

Mostafa Kamel al-Sayed, political science professor at Cairo University, believes that Sisi’s statements indicate a clear intention to amend the Constitution. He says the president wants to “avoid giving up the powers that the Constitution will give to the parliament.”

Most significant among the powers parliament would have, Sayed points out, is the right to give the prime minister confidence and withdraw it from the president.

Parliament, according to Article 161 of the Constitution, can withdraw confidence from the president and hold early presidential elections based on a request signed by a majority of the parliament and approved by two-thirds of its members.

As soon as a proposal to withdraw confidence is approved, the question of withdrawing confidence from the president and holding early elections is presented in a general referendum, announced by the prime minister. If the majority approves the withdrawal of confidence, the president shall be relieved from the post and the position will be considered vacant. Afterward, early elections should be conducted within 60 days of the date of the announcement of the referendum results.

That hundreds of laws have been issued since the ouster of former President Mohamed Morsi and in the absence of a sitting parliament, makes the question of what powers parliament has a very loaded one.

“The president doesn’t want a parliament that has the power to review all the legislation he has issued,” Sayed says.

In the absence of parliament, the president may issue laws, to be presented, discussed and approved within 15 days of the convening of the new parliament, according to Article 156 of the Constitution. In the event that these laws are not presented to parliament and discussed, or they are presented and do not gain the parliament’s approval, they shall be retroactively revoked without the need to issue a decision to that effect.

While Hoda al-Sada, a member of the committee tasked with drafting the constitution, is uncertain about Sisi’s intention to amend the Constitution, she is keen on keeping it for at least 10 more years.

“The trend among those who want the Constitution amended is an attempt to reduce the parliament’s powers again … There is media rhetoric, for example, which has tried to pave the way for this, attempting to convince public opinion that the Constitution grants parliament too much power,” she said.

Sada acknowledges that those who reject the Constitution have expressed reservations over the political climate under which it was drafted and ratified, “but we have to remember that the political climate allowed a lot more than what is allowed now,” she says. “We are now in a difficult situation in terms of general freedoms.”

The Strong Egypt Party was one of the main opponents to the Constitution, and had called for a “no” vote during its ratification.

Mohamed Othman, a member of the party’s supreme committee, told Mada Masr that any attempt by the president to amend the Constitution should be confronted by an alliance of parties, whether or not they voted yes.

“Defending the Constitution in this case becomes an attempt to preempt the consequences of broadening the president’s powers, which may include extending his presidential term,” he warned.

The Strong Egypt Party is boycotting the upcoming elections, objecting to the laws regulating it, which it deemed unconstitutional, as well as what it described as an intervention by security bodies and other state institutions in the process.

Shehab Wagih, spokesperson for the Free Egyptians Party, ruled out both the possibility of a call to amend the Constitution and the notion that the president may be anxious about ruling alongside parliament.

“The president isn’t afraid of the parliament’s powers because his popularity overshadows that of all the parties running for parliament anyway,” he told Mada Masr.

The Free Egyptians Party is contesting 210 seats in the upcoming elections, as part of the “For the love of Egypt” list, which comprises members of the Wafd Party, Conservative Party, Future of a Nation Party and the Dostour Party.

Mosaad Abu Fagr, a member of the committee tasked with drafting the constitution, suggests that the same people who voted with enthusiasm for the constitutional draft in 2013, are now indifferent about the question of amendments, given that the Constitution is so often violated.

The Constitution was ratified with a 98.1 percent vote, compared to 90 percent of the votes given to Sisi in the presidential elections.

Cairo University’s Sayed believes that Sisi wants to “run the country the way the military is used to running it, without having his decisions reviewed.”

“Any step by Sisi to expand the president’s powers again,” Sayed argues, “is nothing less than a violation of the history of the Egyptian national movement since the 1860s, the main drive of which were demands to end the occupation and a constitution that guarantees reducing the power of the executive authority.”

This is particularly so, he says, given that the current Constitution grants the president powers that were not given to him in the 2012 Constitution, drafted under the auspices of President Morsi, including the right to dissolve parliament and to appoint 5 percent of its members.