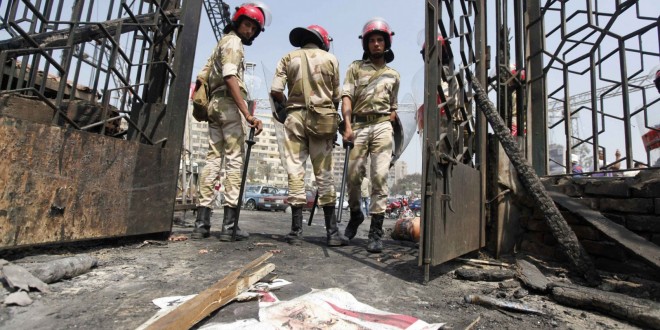 “His leg is broken. I cannot leave him here,” said a doctor in makeshift hospital in Rabaa al-Adawiya square to a special forces officer.

“Don’t worry. I will break his heart,” replied the officer before putting a bullet in the injured protester’s chest.

The surreal brutally was just a tiny part of what happened in what Human Rights Watch called the ” worst mass unlawful killings in Egypt’s modern history” and “a likely crime against humanity.”

After several national security meetings in July and August of 2013, a group of military intelligence, police generals and civilian politicians appointed by the military, decided to storm massive sit-ins in Cairo’s Rabaa and Giza’s Nahda squares protesting against the removal of Egypt’s first-ever freely elected president on July 3, 2013.


The exact death toll of the crackdown is still unknown.

This is partly due to the nature of the current political climate and the hurdles imposed by the ruling regime on collecting data about the massacres.

But this is also due to other factors, such as burned dead bodies and fears of victims’ families of going to the morgues or hospitals.

Following the massacre, the health ministry claimed that over 600 people were killed.

The Muslim Brotherhood maintained the death toll was over 2,500.

Human Rights Watch estimated the death toll to be over 1,000.

And everything happened in less than 10 hours.

The bloodiness of Rabaa and other mass killings such as the Republican Guard headquarters, Nasr City and Nahda Square massacres of the same 2013 summer is likely to impact Egypt’s present and future.

Globally, massacres with that level of bloodshed usually have major local and regional, social and political consequences.

The tragic death of fourteen protesters on “Bloody Sunday” in 1972 in Northern Ireland engendered “The Troubles” years and a prolonged military and political confrontation between the British authorities, the Irish Republican Army (IRA) and other Republicans forces.

The tragedy was investigated by the Saville Report, and the British Prime Minister David Cameron gave an apologyin 2010 for the violations committed by British troops.

The Fatima massacre, the worst in Argentina’s “dirty war” yielded 30 fatalities at the hands the junta’s security services in 1976.

The prolonged confrontation – both armed and unarmed – yielded the “trial of the juntas” starting in 1985.

Some of the 1976 military coup leaders were prosecuted, including two former presidents: General Jorge Videla and General Leopoldo Galtieri.

The Arab world saw much worse political massacres compared to the aforementioned ones.

It yielded more than 1,200 fatalities in a two-day human carnage.

However, the relatively institutionalised justice process seen in Argentina and the national reconciliation seen in Northern Ireland were never implemented in Libya.

A credible transitional justice process was unheard of under the Gaddafi regime and the tyrant was brutally killed by armed revolutionaries during the 2011 revolution.

Saddam Hussein met a similar fate after the United States forces were able to capture him and hand him over to a controversial Iraqi court that executed him for the Dujail massacre, in which 148 residents of the town of Dujail were executed in 1982 by the regime.

In Egypt, the July coup and the July-August massacres were a result of the imbalance of power within the coalition that supported the coup.

The most powerful actor in Egypt’s “coalition of the unequal” was the military, followed by the security hawks.

And at the bottom of the power chain laid the non-Islamist civilian politicians from various ideological backgrounds.

The security hawks wanted eradication or a complete surrender of the pro-Mohamed Morsi coalition, whereas a few of the civilian politicians, most notably the appointed Vice President Mohammed ElBaradei, wanted limited repression of the pro-president coalition.


If bullets consistently prove that they are much more effective than ballots, the prospects of sustaining non-violent politics in Egypt and the region becomes highly questionable.

That imbalance of power continues to affect human rights in Egypt today. It led to the arrest and political persecution of many of the supporters of the July 3 coup as well as the Rabaa massacre.”It was cheerleaders versus real players […] and the formers will never make the decisions for the latter”, one former military general told me.

Within the hawkish military faction, there is a strong belief that Field Marshal Hussein Tantawi (head of the Supreme Council of Armed Forces between 2011 and 2012) was lenient in dealing with protesters and opposition.

Therefore, the lesson learned from Hosni Mubarak and Tantawi’s days was to crackdown harder and ignore human rights reports.

The calculation of that faction under General Abdel Fattah el-Sisi was simple: if he used Gaddafi or Assad-like crackdown tactics following the coup, the likelihood of NATO intervening as in Libya or the army splitting and facing significant civilian armed resistance as in Syria was almost null.

And if parts of the latter scenario materialised, the army and police would have the superior capacity to use violence and win any armed conflict.

Rabaa massacre is certainly a major step backwards on the road of reconciliation and potential future democratic transition.

Egypt failed to resolve a political crisis without major bloodshed and failed to limit the political conflict to the institutional realm of ballot boxes, constitutional articles, negotiations, and compromises.

” We had a political plan that was on the table that had been accepted by the other side [the Muslim Brotherhood]”, said the EU Envoy for the Southern Mediterranean Region, Bernardino Leon.

“They [the military and its appointed government of Hazem el-Biblawi] could have taken this option. So all that has happened today [August 14, 2013] was unnecessary”, explained Leon, hours after the Rabaa crackdown.


This is bad news. It simply means a continuation of a vicious historical trend.

Brutal repression of dissidents in Egypt and the Arab majority world has not only sparked waves of political repression and non-state armed actors, but also ideologies that legitimated various forms of political violence, from military coups to urban terrorism.

Votes, constitutions, good governance and socioeconomic achievements can remain to be secondary means, and even relegated to cosmetic matters.

And if bullets consistently prove that they are much more effective than ballots, the prospects of sustaining non-violent politics in Egypt and the region becomes highly questionable.

By Omar Ashour, Senior Lecturer in Security Studies at the Institute of Arab and Islamic Studies at the University of Exeter and an Associate Fellow at Chatham House.