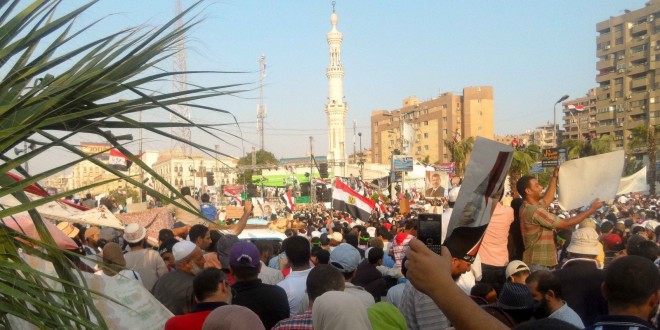 On the second anniversary of the violent dispersal of sit-in camps at Rabea al-Adaweya and Nahda Square that left more than 1,000 people dead, local and international rights groups released statements condemning the state for its role in the bloodshed, and for failing to bring those responsible to justice.

The Egyptian Initiative for Personal Rights (EIPR) released a statement on Thursday afternoon calling both the events of August 14, 2013 and the subsequent lack of accountability a “disaster.”

Titled “Two years of systematic security violations and continued political impunity,” the report accuses the police and Armed Forces of “murder and killing regardless of the size and peacefulness of the protests.”

And since then, the government’s commitment to investigating the events have been “disappointing and below expectations,” EIPR said.

The report goes on to condemn the authorities for continuing to commit flagrant human rights violations  since Rabea, citing the disproportionate force used by security forces to disperse a peaceful protest early this year marking the anniversary of the January 25, 2011 revolution. Activist Shaimaa Sabbaghwas shot to death in the incident.

In 2015 alone there have been “at least two cases where security forces were responsible for the deaths of opposition members,” EIPR argued. “In those cases, the security forces stated that the people in question initiated the violence, in contradiction to many documented testimonies.”

The report also pointed to a number of other basic rights violations, such as thousands of politically motivated pre-trial detentions, and the deaths of dozens “in detention as a result of torture, medical negligence or overcrowding.”

The New York-based Human Rights Watch (HRW), which previously decried the events of August 14, 2013 as a “likely crime against humanity,” called for an international inquiry into the deaths in its Friday statement.

HRW called on the United Nations Human Rights Council and the African Commission on Human and Peoples’ Rights to investigate the mass killings, while criticizing the US and European Union countries for overlooking Egypt’s poor human rights record and continuing to give military aid to President Abdel Fattah al-Sisi’s administration.

The International Commission of Jurists (ICJ) also released a statement on Friday condemning the impunity of authority figures two years following the dispersal.

Said Benarbia, director of the ICJ’s Middle East and North Africa program, wrote, “It is a measure of the total disregard for victims’ rights and the absolute impunity of the armed and security forces that in the two years that have passed, no effective investigations in line with international standards have taken place and not a single person has been brought to justice for the mass killings of protestors.”

The committee “concluded summarily and without substantiation that the police had been justified in violently dispersing the protest, and blaming primarily the organizers of the sit-ins as well as the protesters for the high death toll,” the ICJ claimed.

EIPR’s report also condemned the fact-finding committee, stating that while it included public testimonies, it “fell below expectations and [the committee] failed to take advantage of the possibilities afforded to it when it was formed.”

The fact-finding committee’s report was solely issued to place “the blame on unarmed protesters for their insistence on staying at a site of violence,” while “stressing that the security forces took adequate steps to reduce losses and provide a safe way out for the protesters,” EIPR argued.

Furthermore, EIPR noted that the fact-finding committee has not issued its full report about the events that took place in the summer of 2013, just a summary of its findings.

EIPR also took the commission to task for failing to follow the recommendations that the rights group issued in its 2014 report, such as failing to call for those responsible for the violence to be held accountable, or to push for a review of legislation regulating the use of force and firearms by security forces.

Other recommendations had included initiating “a comprehensive independent judicial investigation into the violent events that have broken out since the January 25 revolution. The investigation would include the issuing of a witness protection law and the ability to investigate any state official, and any data or documents, public or private.”

They also recommended the formation of an independent committee of security experts, lawyers, representatives of civil society and political parties to “propose policies, technological systems and changes to police practice,” as well as the “the establishment of an independent oversight mechanism for the executive branch to investigate the killings or dangerous injuries caused by dealings with police.” The group also reiterated its calls to cancel the protest law.

“The absence of truth and accountability two years after the dispersal is a disaster,” EIPR concluded, “no less a disaster than the killing of over a thousand people. The persistence of the same security practices is not as alarming as the possible increase of similar incidents in the future. History has revealed that the rule of law and the protection of the fundamental rights of citizens is in itself the most effective action in the face of the dangers of violence and terrorism.”