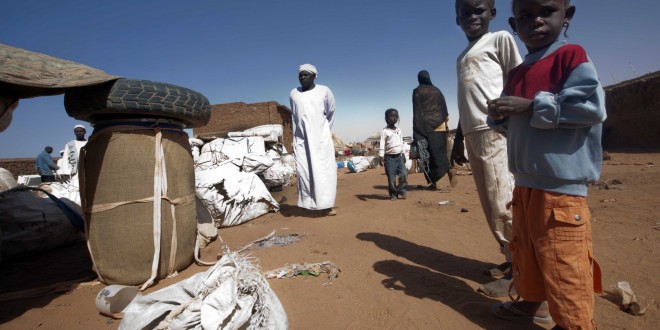 7 March 2011. Malha (North Darfur): Sudanese, originally from Darfur, just returned from Libya to Malha (North Darfur) and concentrated by the local authorities in a check point outside the village. The returnees are about 60 (mostly women and children) and they arrived on Sunday 6 March from villages located in South Libya. The Returnees, mainly migrant workers belonging to Zaghawa and Meidob tribes, left Sudan some years ago to search for job opportunities in Libya. They are now returning from Libya since they have lost their jobs due to the current crisis as well as for alleged security concerns. The local authorities in Malha are expecting 40 more trucks from Libya (more than 2,000 returnees) for the coming days and they asked help from the UN agencies (UNICEF, OCHA, WHO, UNHCR) to attend all of them. Photo by Albert Gonzalez Farran / UNAMID

Kalthoum, a Sudanese mother of four from the Nuba Mountains, has lived in Cairo for more than 10 years. She has gained from and complained about unstable assistance from international organisations. She has worked informally as a domestic worker. She has been detained.

“The situation has gotten worse,” Kalthoum told Middle East Eye, when asked how things have changed since the mid-2000s. “And you know why? For buying things, it was cheaper then than now. For salaries, when you were working in a home, it was much higher. Now it’s less. Also now the protection has gotten worse.” Kalthoum remembers being stopped by police for the first time last year. Egypt’s irrefragable relationship with security apparently can interfere in the lives of Sudanese refugees as well.

“Nowadays I find people who’ve just arrived [in Cairo], asking me as someone who’s stayed here for more than 10 years, and they say: ‘How did you stay this long?’ But I tell them it was better than now.”

Syrians are usually said to make up Egypt’s largest refugee population – which currently stands at about 135,000 registered refugees. However, this number is dwarfed by Sudanese nationals, who constitute up to two million people in Egypt – perhaps several hundred thousand of them refugees, registered and otherwise. Many have been here for years.

Recent UNHCR data now suggests that more and more Sudanese refugees may be turning to the Mediterranean’s smuggling networks as a way out of longstanding difficulties.

Abdel Salam is a community activist from Darfur, who has lived in Egypt as a refugee since 1993.

“People aren’t willing to wait anymore,” he told MEE. “Everything is going wrong here. You don’t have help or income or any organisation standing behind you. UNHCR has washed its hands of you. You must wait here for five years, or three years, until they think about you [for refugee status determination – RSD].”

Abdel Salam, who follows the cases of Sudanese – and particularly Darfuri – refugees in Cairo, believes that most refugees taking boats from Egypt “are just searching for the best life”.

“You’re running from war to find the best, safest place to live. But there’s barely any help here.” Instead, he argues, Sudanese refugees are “suffering here in Egypt…that’s why they’re trying to reach [European] countries, by any means.”

Has the situation gotten worse?

In 1993, the year that Abdel Salam arrived, Sudanese citizens did not require entry visas to come to Egypt, part of the 1976 Wadi al-Nil (Nile Valley) Agreement, an affirmation of good relations between Cairo and Khartoum. That changed in Addis Ababa in 1995 after an attempted assassination against then-president, Hosni Mubarak, supposedly traced back to Sudanese Islamists. Sudanese in Egypt would no longer enjoy the same rights akin to citizenship.

These peaks and troughs are all consistent with the “substantial (though occasionally prickly) relationship…firmly founded on history and the Nile” described in a 1990 US diplomatic cable written not long after Omar al-Bashir’s coup in Khartoum.

These days, Sudanese refugees in Cairo believe that stronger relations between the two governments means that refugees face intimidation and threats by Sudanese intelligence services in Cairo.

But one of the main challenges is just making ends meet.

“Most of the refugees here work as housekeepers or drivers,” Abdel Salam told MEE. “I was a driver and used to get a good salary. I could keep my family safe with around LE3,000 ($3,831). It was hard to put my kids in school, but at least I could afford the housing, food, medicine and so on.”

That stability evaded Abdel Salam after the regulations for gaining a license changed, meaning that his type of residency would no longer make him eligible to work. Perhaps unsurprisingly, he now claims that life for Sudanese refugees in general is getting worse.

“Now I have no income and no help,” he told MEE. “Really, for everyone who’s filed for resettlement for the US, their lives are hell. The process takes such a long time.”

Abdel Salam is currently waiting for resettlement to the United States – supposedly the greatest prize of UNHCR registration – although he has been waiting for some time now.

Abdel Salam’s bitterness at protracted situations, the role of international organisations like UNHCR, the position of refugees as pawns, victims of geopolitics – these might be traced to his role in one event that has left an indelible mark on Egypt’s Sudanese community: the crackdown on the Mostafa Mahmoud sit-in, 29 December 2006.

Led by Sudanese refugees angered by bureaucracy and inactivity after UNHCR decided in 2004 that it would no longer run refugee status determination for Sudanese refugees following a June 2004 ceasefire between Khartoum and the Sudan People’s Liberation Army, for months after September 2006, thousands of refugees occupied the park in Mostafa Mahmoud, close to UNHCR’s old headquarters. Abdel Salam was a negotiating representative for the sit-in.

After months of failed negotiations, Egyptian police stormed the camp in December, killing dozens in a forced dispersal carried out with water cannons, truncheons, hands and fists. Some 29 people died, a figure that includes 11 children and a man who committed suicide in detention shortly after the dispersal.

A US diplomatic cable featuring then minister counsellor for economic and political affairs at the US Embassy in Cairo, William R. Stewart, dated 24 July, 2008 but later released by Wikileaks, shows that the Egyptian government’s tepid response to the Sudanese community post-Mostafa Mahmoud was to “make sure that doesn’t happen again” (in the words of the Foreign Ministry’s deputy assistance minister for refugees).

Ten years on: ‘Waiting for resettlement’

But the aftermath of Mostafa Mahmoud can still be felt in Cairo’s Sudanese community, nearly 10 years on. Some of the sit-in’s organisers and negotiators – like Abdel Salam – are still here, waiting for resettlement. Others remember it all too well, one episode in a timeline of detentions, forced migration, diaspora hardship.

Mohamed, a Sudanese refugee from Darfur now in his late 30s, was arrested that day at Mostafa Mahmoud. He talks matter-of-factly about what happened, perhaps because he has experienced so many difficulties since then, or when his village was raided by government security forces before that in the mid-2000s – the reason he fled Sudan.

“[UNHCR] said they would stop dealing with Sudanese refugees – they would not give us a form to register. My visa was finished so I went to sit with the people in Mostafa Mahmoud,” he says. “The Egyptian government came and finished the sit-in. They took us to jail.”

In fact, Mohamed has been jailed many times. He fled Sudan after being taken captive and into forced labour by a government militia, before escaping to another city where police tried to use him as an informant to gain information about rebels or pro-rebel figures back in his village. Mohamed had to report daily to the local police station, he recounts, shaking his head at the memory.

After reaching Egypt, Mohamed was detained on the north coast last year – he says while meeting with some of the city’s top smugglers in order to research Sudanese migration routes for a Darfuri community-activist group he works with. He denies he was there to take a boat.

From Alexandria, Mohamed was taken to Qanater Foreigners’ Prison, detained for more than four months, and threatened with deportation on several occasions.

“They told me: ‘You have to travel to your country,’ but I told them that I couldn’t because I have problems there,” says Mohamed. “The police just said that if I didn’t go back [to Sudan], then I would have to stay in jail.”

This stalemate lasted until January, when Mohamed was finally released.

Mohamed recounts all this in plain terms, like a series of events that happened to him. It is only when Mohamed talks about the day he left Sudan in 2006, by boat to Upper Egypt’s Aswan, that he breaks down into bitter tears.

Although crossings at the border with Israel reached almost zero last year, largely because of a border fence erected by Israel in 2010 and the deteriorating security situation in northern Sinai, Sudanese are unbelievably still trying.

In late July, Youm7’s English-language website Cairo Post reported that 17 Sudanese nationals were arrested trying to reach Israel. Israeli and Sudanese newspapers also claimed last Thursday that Egyptian authorities may have allowed Israeli commandos onto Egyptian soil to apprehend 15 irregular migrants (some of them Sudanese) who were trying to cross the border.

Sudanese are also regularly detained in and around Salloum, a border town close to Libya and a gateway for those looking to reach boats or job opportunities in the restive country.

Away from these increasingly precarious migration routes, there is instability and waiting.

Mohamed says he’d go if he had the money. Kalthoum has family members who took the boats last year, but she has children to look after and a resettlement case to see through.

Before she leaves, Kalthoum remembers something that happened recently, watching a fight break out between one Sudanese refugee and security guards outside the headquarters of an international organisation handling their resettlement files; the frustrations of this drawn-out process made real. She talks about it like a metaphor for Sudanese life in Egypt.

“I was just sitting there…when suddenly I heard shouting. I look over and found three security guards fighting with a refugee, and all of the Sudanese are just standing and watching it.”

Why? “Because they’re scared…everyone is scared. They’re worrying about: ‘Maybe they will close my file; maybe they bring the police and put me in jail.’ So everyone was just watching.”