Home / Featured Articles / In Egypt, an act of political violence every 1.5 hours: report 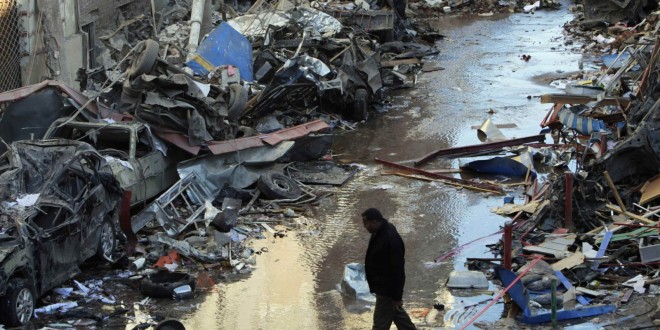 In Egypt, an act of political violence every 1.5 hours: report

Egypt experienced 1,641 acts of “political violence and militancy” in the first quarter of 2015, equal to an average of one incident every 1.5 hours, a new report has found.

174 Egyptians were killed and over 600 injured as a result of politically motivated violence in the first three months of the year, according to a report published this week by the Cairo-based Democracy Index.

The watchdog, a non-governmental scheme funded by the Cairo-based International Development Centre, found that incidents had steadily decreased since the start of the year, with the largest number of violent acts – 664 – occurring in January, when Egypt marked the fourth anniversary of its 2011 uprising against Hosni Mubarak. Cairo was the most violent area of Egypt in the first quarter, closely followed by the restive province of North Sinai, where the government is leading a military crackdown against militant groups.

The report included incidents where bombs were planted but later defused without injury – these made up the vast majority of “violent acts” in the first quarter of the year, at 535.

IED and sound bomb explosions occurred on 286 occasions, according to the report, equal to three a day.

The frequency of bomb blasts in the first quarter of 2015 led the popular Egyptian traffic app,Bey2ollak, which aims to “empower people to beat traffic”, to launch a social media service to inform people of the location of explosions.

The service collates information from Twitter users on the hashtag#Bey2ollak_Where_Is_The_Bomb before verifying the data and sending an update to users of the app.

Bombs usually aim to kill and injure people working in the police and the army, as well as infrastructure like electricity towers, which the report found were targeted on 115 occasions between January and March.

However, civilians and passersby are also frequently killed by explosions in public places – in early March a blast outside the Supreme Court building in Cairo killed two people, among them a young lawyer who had just signed his oath of admission to the profession.

The third most common form of political violence was found to be “dispersal of protests and clashes between demonstrators and police”.

According to the report, police were “the primary cause of 228 acts of violence”.

Up to 20 people were killed in one day on the 25 January uprising anniversary, including one police officer.

The killing the day before of an unarmed protester, Shaimaa Sabbagh, who was on her way to Cairo’s iconic Tahrir Square to lay flowers for those killed during the 2011 protests, also sparked outrage in Egypt, with many activists warning that the perceived police impunity that led to the uprising against Mubarak had yet to be tackled.

A police officer has since been transferred to the prosecution to face trial for her murder.

Speaking during a meeting with the country’s interior minister, the head of intelligence and security and army leaders, Sisi stressed on Thursday the need to continue targeting the “springs of terrorism and crime” in the country.

The “complete co-ordination of field work” by the army and the police will continue, according to the president’s statement quoted in the state-run al-Ahram newspaper.