Home / Normal / Mass executions and the absence of justice in Egypt 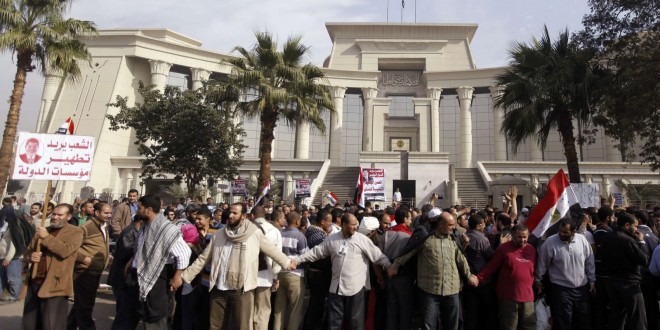 Mass executions and the absence of justice in Egypt

An Egyptian court has sentenced a group of Muslim Brotherhood officials to death and others to life imprisonment. The case has been dubbed by the media as the “Rabaa operations room trial”, and it has sparked widespread controversy over the reasons for such harsh sentences. Legal and human rights activists and experts are calling it “the deliberate elimination approach” against those opposed to the coup and the state authorities headed by Abdel Fattah Al-Sisi.

Since the coup staged in July 2013 against the elected government of President Mohamed Morsi, more than 700 of Al-Sisi’s political opponents have been sentenced to death; one sentence has already been carried out. Over 1,100 opponents have been imprisoned, according to local and international human rights reports from organisations such as Amnesty International.

The latest of the death sentences were issued by Judge Mohamed Nagy Shehata on Saturday against 14 Muslim Brotherhood officials, the most prominent of whom is the group’s Supreme Guide, Mohamed Badie. This raises his particular sentencing record to four executions by hanging and a total of 104 years in prison on charges in six other cases brought before the courts. He is still a defendant in 34 other cases, for which sentences have not yet been issued.

According to one legal expert, the recurring rulings sentencing the movement’s Supreme Guide to death and prison indicate a “legal fault”, given that each charge requires only one sentence to be passed. This expert believes that the Egyptian authorities have issued several sentences deliberately for “political purposes”.

The latest death sentence issued against Badie is the first to be issued against him in his presence after the Court of Cassation decided to cancel a similar death sentence laid down in absentia in the “Al-Adwa” case. Two similar sentences were also issued without him being present and they are scheduled to be reconsidered in future hearings in which the Supreme Guide will appear before the court wearing the red uniform indicating that he is scheduled for execution.

Judge Shehata is nicknamed “the execution judge”; he issued sentences up to 50 years imprisonment and a death sentence against the Brotherhood leader. He is also the judge who transferred Badie’s file to the Egyptian mufti twice; support for execution was only given once by the Islamic official.

Egyptian legal expert Abu Al-Khair believes that the rulings against the Brotherhood leaders are “politically motivated”, with the aim of putting pressure on the Islamic movement to accept some sort of reconciliation or settlement.

“It is well-known and established legally that a defendant who has committed several crimes is sentenced to the maximum and harshest penalty,” the international law professor told Quds Press, “and if the punishment for that crime is execution, then they are sentenced to it once, as it cancels out any less harsh punishments.”

Abu Al-Khair also noted that the death sentences issued in the “Rabaa operations room trial” are “political sentences” to put pressure on the movement to accept a settlement or reconciliation and to prevent protests. “This is a grave professional error on the judge’s part that must be presented to a disciplinary committee,” he insisted.

A number of human rights organisations based in Europe signed a statement condemning the judicial proceedings in Egyptian courts, which are considered to be abuses of the rights of those accused. These organisations believe that the rulings issued by the Cairo Criminal Court in the “Rabaa operations room trial”, which prosecuted 51 citizens altogether, including journalists, activists and human rights defenders, as well as the Brotherhood officials, are all “flagrant violations of justice and a flaw in the foundations on which the judiciary should be based.”

In a public statement, the organisations noted that the legal proceedings in the trial, from the beginning until the verdict was issued, included “scandalous breaches” of the standards required for a fair trial. “Prisoners were not even brought to the court for the sentencing, while the pleas of some were not heard,” they pointed out.

“The sentences issued yesterday are dominated by a political nature and have no legal grounds. There are also serious doubts regarding the independence and impartiality of the head judge, Mohamed Nagy Shehata, as he expressed his conviction of the defendants’ guilt throughout the trial before hearing their pleas. He is also the one who has issued hundreds of death sentences in Egypt over the past few months, totalling 210 with the sentences he issued yesterday. The defence lawyers had requested that he be removed from the case due to his lack of impartiality,” the statement explained.

The human rights bodies urged the Egyptian authorities to reconsider these death sentences. They also called on the UN High Commissioner for Human Rights, the Working Group on Arbitrary Detention, and the Special Rapporteur on the Situation of Human Rights Defenders to intervene with the Egyptian authorities and ensure the immediate release of the defendants, especially the journalists, and make sure that they are “compensated justly”.