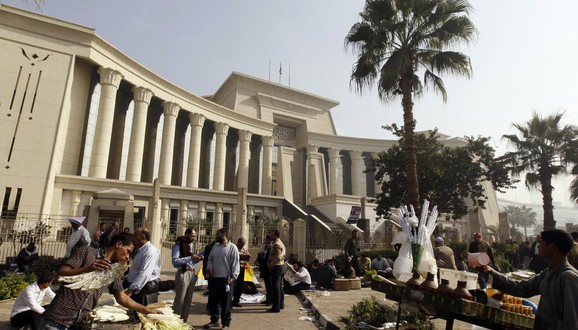 CAIRO — The Egyptian parliament spent long hours discussing and drafting the political rights law, but the constitutional court caught it off guard.

Egypt’s Supreme Constitutional Court deemed nine articles in the law to be unconstitutional; most of them can be easily modified to the court’s satisfaction, except one that ignited a new, fierce episode of the ongoing conflict between the court and the presidency.

The constitutional court ruled that the armed forces’ officers and conscripts must be granted the right to vote, stating that “depriving the officers and personnel of the armed forces and police from exercising their political rights … is a derogation from the public’s sovereignty, and a deprivation of [the personnel’s] citizenship rights.”

Islamists, who constitute the majority of the parliament, accused the constitutional court of trying to bring the military to authority “through the back door.”

Since 1976, the military has been “exempted from their duty [to vote],” as long as they were in service, after former president Anwar Sadat amended the political rights law.

The decision to remove the army from the electoral process was not welcomed by many officers when it was enacted.

“Soldiers might lose their lives in war; they should have the right to choose their leader, instead of risking themselves for a cause they don’t believe in,” said Talaat Musalam, a retired major general and a strategic analyst.

Musalam believes that army officers and soldiers must be banned from joining parties, since it would jeopardize their commitment to serving the country’s higher interests, regardless of political beliefs. Voting, however, is a different story, as he views it as a personal activity that doesn’t interfere with soldiers’ obligation to obey orders.

“I personally voted against former president Gamal Abdel Nasser in the 1965 referendum, and this never meant I would disobey an order by a superior officer,” said Musalam, who was a first lieutenant in the 1960s, and never missed an opportunity to vote until he was deprived of this right.

Musalam hints that the 1976 amendment was politically motivated, and aimed to neutralize the army’s expected backlash against President Anwar Sadat, because many officers were unsatisfied with the conditions of the peace treaty with Israel after the Yom Kippur War.

While Musalam depicts a positive picture of the era when men in uniforms were free to vote, other witnesses of the same period very strongly disagree.

Constitutional expert Shawky al-Sayed was a member of the judiciary commissions that supervised the elections in the 1960s. He remembers how the voting process went: “We counted the civil votes, gave the results to the army, then they would add the military votes and announce results.”

Sayed said that he and his colleagues were suspicious of the process, and believed the army might have rigged elections and freely manipulated the results, in the absence of any supervision of the voting and counting inside military bases.

According to Sayed, the constitutional court based its latest decision on a technicality, since Article 55 in the new constitution failed to specify the conditions that limit citizens’ ability to participate in politics.

“The only way to avoid this rule is through amending the constitution and closing the loophole,” Sayed said.

This is not the Egyptian parliament’s plan.

“We do not intend to deal with the constitutional court,” said Sobhy Saleh, spokesman of the Freedom and Justice Party in the Egyptian parliament. “We are going to address the army and the police about the effects of granting soldiers the right to vote on national security.”

Saleh told Al-Monitor in a telephone interview that if the army said that such a decision would threaten its ability to fulfill its duty, the court’s rule could not be implemented.

Being a member of the committee that drafted the constitution, Sobhy asserts that the court’s rule belies the will and intentions of the legislators. “We thought it was an already established rule that the army doesn’t vote, we never expected the court to scrutinize [the constitution] and reopen a settled debate.”

Saleh said that getting the army to vote means parties must have the right to target them as a voting bloc, which would polarize the army and makes it vulnerable to penetration by political rivals.

“The army is the only establishment in the country that retains the entire nation’s trust and consensus,” said Sobhy. “Allowing them to be involved in the political process will be the end of its revered stature. “

Ahmed Sameeh, director of the Andalus Center for Tolerance and anti-Violence Studies, says that once a high school student joins a military academy, he agrees to give up many of his civil rights.

If a student in the military academy left campus without permission, he could be jailed in the brig. “In a normal setting, such a situation is a violation to the student’s right to move at his will, but the army has the right to set its own code relevant to its special mission,” said Sameeh.

Sameeh argues that it is impossible to dismiss hundreds of thousands of officers and soldiers across Egypt to vote, which means that the ballot boxes must be located inside the barracks and bases, where international observers won’t have access, and civil society activists can’t freely photograph and document any possible breach.

Another point that worries Sameeh is the nature of the Egyptian army itself, which “trains its soldiers on blind obedience, and can easily order the majority of soldiers towards a certain vote.”

Conscription is obligatory in Egypt.  Every year the army receives hundreds of thousands of young soldiers, who spend up to three years in service, during which they are mostly isolated from any influence except their commanding officers.

“It will be a military coup through the ballot box,” Sameeh said.

Defense Minister Abdul Fatah al-Sisi didn’t comment directly on the ruling, but while attending an army drill he said: “The armed forces will never be politicized, nor polarized by parties.”

Both the army and the parliament’s stances regarding the court’s ruling are irrelevant to the discussion, said Tahani al-Gebaly, former vice president of the Supreme Constitutional Court.

Gebaly told Al-Monitor that voting is an issue of personal rights, and the opinion of an institution or an organization, such as the army, is not binding on individuals.

“The parliament can take necessary measures to organize how people exercise their rights,” said Gebaly, “but they cannot bar them from those rights because of any practical difficulties and obstacles.”

The next weeks will witness in depth discussions in the Egyptian parliament about the controversial rule, and there is no near end in sight for the debate that its outcome might radically change the country’s political scene.

Civil-Military RelationsJustice
All
2013-05-31
activate
Previous Enlighten us government, were the kidnapped soldiers freed or released?
Next Future Looks Grim For Egypt’s Independent Press