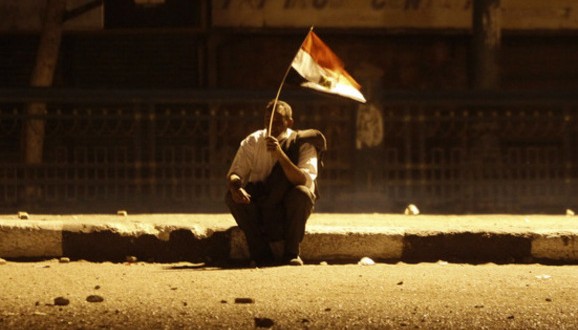 Military Veterans Form Party Calling For Morsi to Step Down

CAIRO — In October 1973, Gen. Mohamed Okasha led a squadron of French Mirage fighter jets to bomb Israeli military targets in the Sinai Peninsula. In January 2011, 38 years later, he stood in Tahrir Square carrying a banner emblazoned with his motto, “The fighters of October ’73 are supporting youth of Jan. 25.” In March 2013, he co-founded a political party, The Egyptian Will Party.

“The idea of establishing a political party started with five retired military officers, now we are 200 former military men who fought alongside each other for long years. And weeks later, we became a minority among hundreds of civilians who joined the party as officials or members,” Okasha toldAl-Monitor at a conference in Cairo on Saturday, May 11. Beside him sat Gen. Samir Aziz Mikhail, his fellow pilot, who was described by military historians as “the best non-Russian to fly the Meg-21 fighter jet.”

Okasha explained that their decision to go political was taken after “witnessing Egypt’s deterioration on every level. We realized that Egypt needs significantly more than protests, television appearances and words published in newspapers.”

The agenda of the newly formed party, The Egyptian Will, embodies the messages, views, demands and even the slogans chanted at more than 15 protests organized by the retired war-medal-wielding officers since the downfall of former President Hosni Mubarak in February 2011.

The party’s agenda clearly reflected how out-of-patience its leadership and members have become. After months of unorganized activism and subtle yet clear messages, they finally hit the political field running. Their first call was for the immediate elimination of Morsi through swift military intervention.

“Our rescue initiative, which was declared in our protest held at the Unknown Soldier Shrine in Cairo two months ago, calls for military intervention to save Egypt and protect its people but never return to power, which is what the military is obliged to do, protect the people and the country,” said the Air Force general, who was only 26 years old when leading his squadron of Mirage fighter jets across the Eastern Suez Bar Lev Line on Oct. 6, 1973.

The five-step “Rescue Initiative” calls for the military’s immediate intervention to force President Mohammed Morsi to step down, hand the country’s interim administration to the head of the Higher Constitutional Court, form a civil presidential committee, reactivate the 1971 constitution and put everyone involved in killings of innocent civilians since Mubarak’s arrival on fair and transparent trials.

Their call for military intervention wasn’t the first. In February 2013, thousands of citizens in the cities of Port Said, Suez and Ismailia started officially registering letters of endorsement calling Egypt’s Defense Minister Abdelfattah El-Sisi to take over the administration of Egypt after almost two weeks of bloody confrontations between police and protesters that left around 50 people dead.

“This is just the beginning of a series of initiatives that called and will continue to call for Morsi’s departure; there will be at least a dozen of those initiatives by the end of Morsi’s first year in power — a lot of them will call for the military’s intervention,” said Ziad Akl, a political sociologist and senior researcher at the Cairo-based Al-Ahram Center for Political and Strategic Studies.

Akl told Al-Monitor, “It is not strange to find military veterans entering politics after four military presidents” since the 1952 coup d’état that put Egypt’s last king, Farouk I, on a cruise ship to Europe. “But they still have to operate on the popular and social level to be able to develop.”

“Now, the military is very popular at the expense of the Muslim Brotherhood’s performance since they took office. There is a chance for such a party to capitalize on their military history,” Akl added. “As for calls for military intervention, they were answered by the military’s pledge never to get involved in politics again.”

Okasha’s talk with Al-Monitor coincided with statements by Defense Minister Abdelfattah El-Sisi, demanding that the government and the opposition “find means of dialogue” and warning that “the army is like fire, don’t play with it.”

“With all due respect to those who call on the military to interfere, no one will remove others and no one should think that the solution is through the military. Standing for 10 and 15 hours at polling stations is better than destroying the country,” said El-Sisi during the periodical inspection of the 9th Armored Division of the military’s Central Command on Saturday, May 11.

Meanwhile, the newly founded party has already started its development efforts in Assuit, one of Upper Egypt’s most impoverished governorates.

“We approached the Assuit Health Department and Faculty of Medicine and offered to finance and apply development plans to a number of unequipped, unused hospitals across the governorate,” said Amir Youssef, an Egyptian economist and top officer of the London-based Egyptian Community Association.

“There are countless Egyptians living abroad who are ready to come back, plan, finance and execute development projects, but there has to be a proper atmosphere to host their efforts, which is what our party will provide,” said Youssef, who lived in the United Kingdom for 42 years, and returned to join The Egyptian Will Party.

“The Assuit initiative is a clear example of our development agenda and on-the-ground efforts,” he said. “Those hospitals will be renovated, equipped and operated by Egyptians who have been longing to return to their homeland, and invest their funds and expertise in it.”

Youssef said he was surprised by the level of harmony between businessmen, political activists and the former military officers who all joined efforts under the party umbrella. “Most of the officers retired long ago but kept their administrative and strategic expertise, others were significantly influenced by their civilian children and relatives.”

“In any case, we, the older generation, are just here to launch the party,” Youssef said. “In a couple of years, we will retire and hand the entire operation to the party’s youth, the main driving force of this whole project.”

Okasha confirmed what Youssef had said. “This party will rely mainly on youth, women and Copts, the underestimated, impoverished and always violated 85% of Egypt’s people.”

“This party is our last battle for Egypt. Morsi and his regime can fight for the Muslim Brotherhood Movement, but we will continue to fight for Egypt.”

This article was originally posted here.
Civil-Military Relations
All
2013-05-14
activate
Previous Egypt's homosexuals struggle for freedom
Next Enlighten us government, were the kidnapped soldiers freed or released?