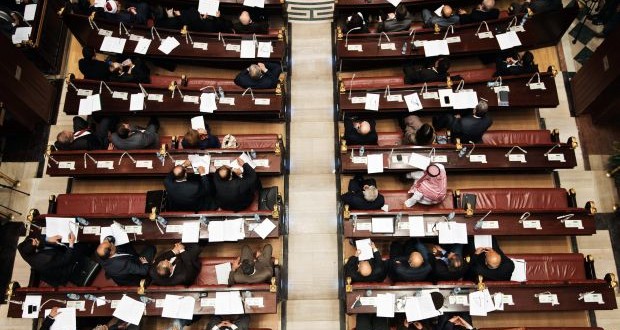 Less than a week after the announcement of the House of Representatives election results, ex-military intelligence general Sameh Seif Alyazal told Egypt’s flagship state newspaper Al-Ahram that “The Coalition to Support the Egyptian State” will be finalized within days.

According to Al-Ahram on Monday, members of the coalition constitute more than two thirds of parliament, bringing together 400 representatives.

Alyazal said he is reaching out to parties like al-Wafad and The Free Egyptians to join the coalition.

Egypt’s recently elected unicameral parliament includes 596 members, 448 of which were elected through the individual seat system, 120 through a party/coalition lists system which were swept by Alyazal’s “For the Love of Egypt” list, and 28 are appointed by the president.

According to the Supreme Electoral Commission, that more than half of the winning candidates, 316, were independents constituting 56.9 percent of the total, while candidates belonging to parties numbered 239, accounting for 43.1 percent.

The average turnout rate of voters in first and second phases of elections was approximately 28.3 percent, said Abbas.

According to Alyazal, the Coalition to Support the Egyptian State will not necessarily support the government but will challenge, question or applaud the government’s performance if needed.

However, he added that “we will stand behind President Abdel Fattah al-Sisi to support stability, promote and meet the demands of citizens.”

The brainchild of 70-year-old Alyazal, “For the Love of Egypt” is known for its public support for Sisi and his government. It has openly voiced its intention to limit the powers of parliament.

Elyazal told Reuters in an interview early October that the list would compete for all seats and “eventually seek to curb the legislature’s wide-ranging powers” by forming a bloc to lead the house.

The upcoming parliament has been assigned many powers including the authority to withdraw confidence from the prime minister, other ministers or even the president. Article 161 of the 2014 constition allows a supermajority of two thirds of parliament to call for a public referendum to end the president’s term and hold early presidential elections.

Alyazal told Al-Ahram, however, that the bloc “does not plan to call for constitutional amendments before another two years”, adding that the constitution will be implemented until “it emerges that some of its articles must either be amended or abrogated altogether.”

The next presidential elections are due in 2018, two years into this parlaiment’s terms.

This is the first parliament to be elected since 2012, when Egypt’s top court dissolved the Islamist-dominated lower house of the People’s Assembly, with the consultative upper house dissloved a year later.

The elections were  the third and final pillar of the roadmap announced by then-Defense Minister Abdel Fattah al-Sisi in July 2013 following the ouster of former president Mohamed Mursi, after protests against his rule.

In the absence of a parliament, the president held the legislative power to pass laws by decree when necessary. Over 300 laws have been passed which the legislatue must discuss and approve within 15 days of conveneing, according to article 156 of the constitution.