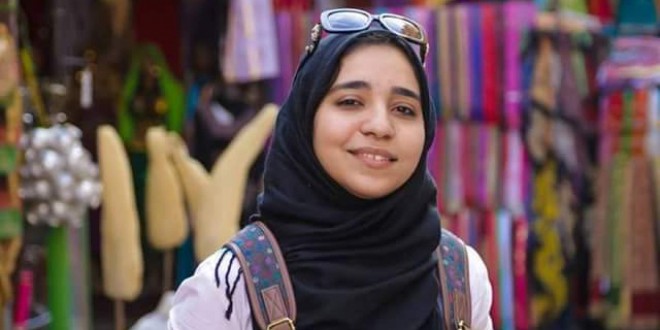 Activist and photojournalist Esraa Al-Taweel has published a letter on Facebook in which she describes the suffering experienced by herself and the other girls detained in Egypt’s Al-Qanater Prison, which she calls the “graveyard of the living”. She disappeared on 1 June and her whereabouts was unknown for two weeks before she was spotted in the prison. Her arrest was detailed in an article published in mid-July.

“Today, 28 July, 2015 is the 58th day since my kidnapping and my 42nd day in Al-Qanater Prison,” she wrote on Facebook. “I still can’t wrap my head around what is happening, even though it’s been over two months since I was kidnapped. Until now, I still wake up terrified and cry and say I want to go home.”

Esraa starts her story from her interrogations by the state security services. “When I was with the state security, I felt like I was already dead. I felt like time had stopped. I was there for 15 days and I felt like I was in my grave, to the point that I would pray to God to revive me just like he will raise the dead from their graves. Yesterday, I was presented before the Supreme State Security Court and my detention was renewed for the fourth time for 15 days. I asked my lawyer to tell my sister I wanted a meal from McDonald’s, but the guard refused to let me do so.”

She explained that she was moved around in a large deportations van, with an escort in the front and one in the back. “I swear they are wasting their time and my time. I hate prison. Before prison, I used to think I feared nothing other than prison, but now I am not even afraid of prison any more.” The experience has led her to understand what people mean when they say that they don’t like prison but don’t fear it.

Al-Taweel mentioned her experience with the prison doctor when he was examining her. “Today, they sent me to a doctor in the prison named Mahmoud Ashour so he could examine my foot problem. He said that I had a permanent disability. I told him the story of my injury and said that I was continuously improving with physical therapy, but he insisted on his opinion and told me he doesn’t like to argue and that I should go back to my cell.”

However, she needs assistance to move about and can’t do so alone. “I am in a cell that is about 3 x 5 and full of cockroaches and insects. The food we have stays in the cell, along with our clothesline. It feels like we are living in a kitchen inside a bathroom on a bed. All the days here are the same; they are a copy of each other. Sometimes I think, why am I eating? What is making me survive and why am I surviving?”

Although during interrogation she simply wished to see her mother and family again, the teenage activist said that she feels as if the life inside is dying. “Every day I was there they would tell me, ‘You are going home; we know you and Omar were not involved in anything and you will be released.’ But every day they lie, I never went home.”

She is not allowed any books or radio; not even comic books. “Prison is very lifeless. The searches conducted by Kawther, Umm Yahya, Syed and Amer, ordered by the Detective Chief Inspector, make sure I do not bring anything in. I was even prohibited from bringing in my pictures. Prison is horrible and in it, life loses meaning. There is no life here and I feel like the dead. I only come alive during the visitation hour.”

The water in prison is horrible, she continued, causing skin infections. “It smells like sewerage, so we are forced to use bottled mineral water. Each one of us needs at least six large water bottles a day for drinking and personal use, such as washing our faces. They do not allow our parents to bring us water from outside because we must buy it from the prison. The electricity is cut off for three to four continuous hours in our cells in this hot weather. Our cells are full of insects, cockroaches, ants and worms and they multiply because our food is kept in our cells and we do not have refrigerators. Our families bought three refrigerators for our cell, but the prison administration has held on to them for months and they do not want to give them to us even though the paperwork is completed.”

In the “filthy” prison, Al-Taweel and her fellow political detainees also suffer from the ill-mannered behaviour of the felons. “They harass us physically and do bad things to us and to each other. Sometimes in the bathroom they completely undress and expose themselves to everyone. They are very dirty with each other and some of them harass us as well. However, the prison administration turns a blind eye to this behaviour.”

In her letter, Esraa Al-Taweel demanded her release. “I demand my release while they continue their investigations. If this is too much to ask, I ask that they at least put me under house arrest until they finish investigating the false accusations directed at me.”