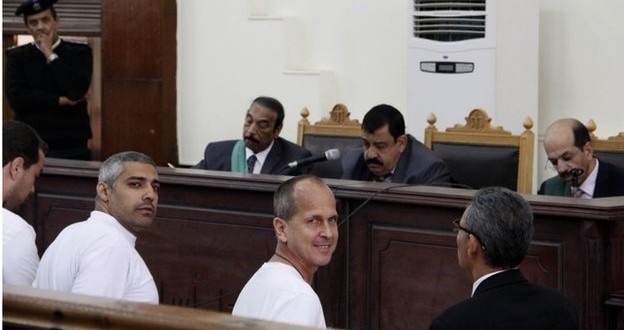 ‘Farcical trial’ in Egypt could prompt push back from journalists

A Cairo court on Sunday postponed the verdict in the retrial of three Al Jazeera journalists for the second time in less than a week, adjourning the trial until 29 August. The presiding judge, Hassan Farid, had been expected to announce the verdict last Thursday but failed to show up in court due to ”ill health”.

The defendants’  family members, friends, and journalists who had gone to Torah Police Academy to cover the hearing, were assured by defence lawyers that the verdict would be delivered the following Sunday. On Sunday however, another judge announced the adjournment of the trial once again, giving no explanation for the latest postponement.

The announcement prompted an outpouring of dismay from fellow journalists, many of whom vented their anger and frustration on social media networks. Using the #FreeAJStaff hashtag,  activists speculated online over the reasons behind the delay, some linking it to the opening of the Suez Canal project scheduled for 6 August.

The general assumption was that if the news were good, Egypt would be proud to share it with the rest of the world ahead of the opening of the new Canal.

For Mohamed Fahmy, an award winning journalist who has worked for CNN and former Al Jazeera English AJE Cairo Bureau Chief, and producer Baher Mohamed – two of 20 defendants in what the Egyptian media refers to as the “Marriott Cell” – the new delay means prolonging their 19-month ordeal for yet another month.

”It is crippling our lives,” a frustrated Fahmy told the National Post after Sunday’s court session which lasted only a few brief moments.

The ‘‘farcical trial” – as it has been described by international rights organisations – has dragged on since early 2014, after Fahmy and Australian reporter Peter Greste were arrested in a police raid on their makeshift studio at a Cairo luxury hotel on December 30 2013.

Baher Mohamed was arrested from his home a few hours later. Facing charges of ”broadcasting  false news with the aim of supporting a terrorist group and harming Egypt’s image”, the three Al Jazeera journalists were originally sentenced to seven to ten years in jail with Baher getting three years more than his two Al Jazeera colleagues for having an empty shell casing in his possession.

In January, after spending a year behind bars, Greste was allowed to return home to his native Australia, his deportation made possible by a decree issued by President Abdel Fattah al-Sisi, allowing foreign detainees to return to their countries to face trial there. A month later, Fahmy and Baher were released on bail by an appeals court that ordered a retrial.  They spent 411 days behind bars prior to their release, pending retrial. Their release also came after Fahmy, who had dual Canadian-Egyptian nationality, gave up his Egyptian citizenship in the hope that he too would walk free.

While the Al Jazeera trial saga may be finally nearing its end, its repercussions could be even more long lasting. For one thing, the damage it has done to Egypt’s reputation cannot be easily undone. It may take many months – years even – for the international community to forget  Egypt’s ranking, along with Syria and Iraq, as one of the world’s three most dangerous countries for journalists and one of the top ten jailers of journalists, according to a 2013 report released by the New York-based Committee for the Protection of Journalists, CPJ.

A prison census, conducted by the same press freedom group in June 2015, found ”at least 18 journalists detained in Egypt in connection with their work.” The number is higher than at any other time since CPJ began recording data on imprisoned journalists in 1990, the group said, adding that Egyptian authorities were ”using the pretext of national security to crack down on human rights, including press freedom”.

Egypt has been ranked 159 out of 180 countries in Reporters Without Borders’ press freedom index. Egyptian officials, meanwhile, deny that there are any journalists behind bars for their work. They insist that ”the journalists that are imprisoned were detained for their connections with terrorist groups” and that ”Egypt’s judiciary is completely independent”.

Rights groups, however, say Egypt’s judiciary is politicised and that the journalists were arrested on trumped up charges. Fahmy has repeatedly said that he and his fellow-defendants were ”pawns in a political dispute between Egypt and Qatar”.

At a joint press conference with visiting US Secretary of State John Kerry, held just hours after the Al Jazeera trial was adjourned on Sunday, Foreign Minister Sameh Shoukry insisted that journalists behind bars in Egypt had been ”accused of implication with terrorist activity”.

He added that they were all ”in the state of due process”. Kerry meanwhile, stopped well short of reprimanding Egypt for its poor human rights record. Expressing support for Egypt in its fight against terrorism, he told the Egyptian authorities that it was ”necessary to show greater respect for human rights”.

His statements came as a blow to Egyptian rights advocates who would have liked to see US aid used as leverage to demand greater reforms and who had pinned their hopes on Kerry’s visit for acquittals of the Al Jazeera journalists.

Sherif Mansour, CPJ programme coordinator for the Middle East and North Africa recently told IPS, ”We would like international policymakers to insist on respect for press freedom and the complete end to ongoing censorship as conditions for support.”

Instead, the US has in recent days, delivered eight F16 fighter jets to Egypt it had earlier withheld, ending a temporary freeze on US military aid that was meant to show disdain for President Sisi’s repression against Muslim Brotherhood supporters. At Sunday’s press conference, Kerry also announced the resumption of  joint military exercises with Egypt, suspended in August 2013 after the violent dispersal of two pro-Morsi sit ins by security forces in Cairo in which at least 800 people were killed.

The Al Jazeera trial is also likely to have an impact on press freedom and freedom of expression in the country, but not in the way the authorities had planned.

While the trial was clearly meant to send a chilling message to journalists – stick to the official narrative or risk imprisonment – it has failed to achieve the desired aim of muzzling journalists.

In fact, this is a case of too much fear and control having a reverse effect: at the onset of the trial, pro-regime journalists had sided with the authorities against the defendants mainly because of a general perception in Egypt that the Arabic AJ network is biased in favour of the Muslim Brotherhood (which the country has designated as a terrorist group).

Regime loyalists in the media had referred to the case as the ”Marriott Cell” to give it a sinister flair. Many of the privately-owned channels broadcast the sinister video of the arrest of Fahmy and Greste, portraying laptops and microphones as ”evidence” of their implication in terrorist activity. Talk show hosts on those same channels also condemned Al Jazeera as ”a mouthpiece for the Qatari government” they accused of plotting to destroy Egypt and foment unrest.

Halfway through the trial, however, the presenters and editors seemed to have had a change of heart. They began sympathising with the defendants and some even defended the jailed journalists. A few Egyptian journalists signed on to the global campaign ”Journalism Is Not a Crime,” launched by supporters to express solidarity with the Al Jazeera detainees. They began posting messages of support for the jailed journalists and calling for their release on social media networks Facebook and Twitter.

Lamis Hadidy, a staunch supporter of the military-backed government, surprised her viewers when she denounced the harsh verdict handed down to the defendants. Several private media outlets and even the state-sponsored broadcaster Nile News began sending their reporters to cover the AJE trial, where before, only foreign media representatives had been present in the courtroom.

While the fates of Fahmy and Baher are yet to be decided, it is heartening to see more Egyptian journalists taking a stand against censorship of late. An example that comes to mind is the case of the young journalists who rejected the so-called ”pledge of allegiance” signed by senior editors who had vowed to refrain from criticising the military, the police and the judiciary during this difficult phase.

Many Egyptian journalists were also vocal in their criticism of the counter-terrorism bill approved by the cabinet in late July. Critics condemned the draft law for what it is: another tool of repression against journalists.

In today’s repressive climate, while they are still overwhelmingly outnumbered by the propagandists, it is these critical voices speaking truth to power that will effect positive change in the society. They are the ones unafraid to shout out loud that ”journalists are not terrorists” and that “journalism is not a crime”.

The day Fahmy, Baher and the other imprisoned journalists are acquitted is the day justice will finally have been served. It is also the day Egypt begins a fresh page. Only then, will the country’s free press advocates rejoice. 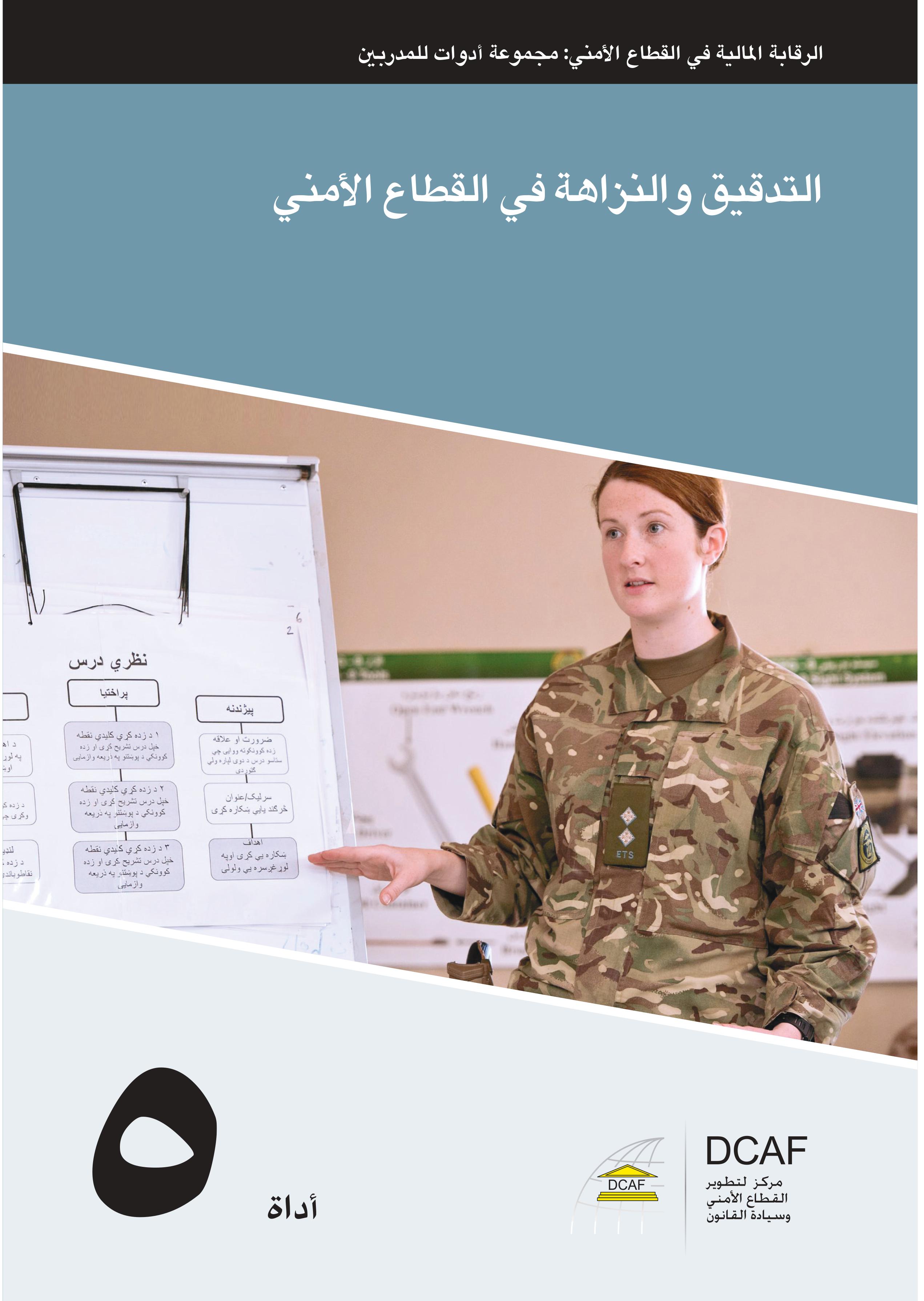